This news is present by General Inspection Services Co., Ltd. Please be noted that all this news is excerpted from the China Daily, all copyrights are held by their respective owners(Wang Xiaodong and Qiu Quanlin).
Update in 2013-07-22 03:01
An updated European Union safety regulation on toys will place pressure on Chinese toy makers and affect the nation’s exports to an already weakening European market, but could also provide an opportunity to upgrade the domestic toy industry, industrial insiders say.
The new toy safety directive, adopted by the European Parliament and the Council of the European Union in 2009, took full effect on Saturday. 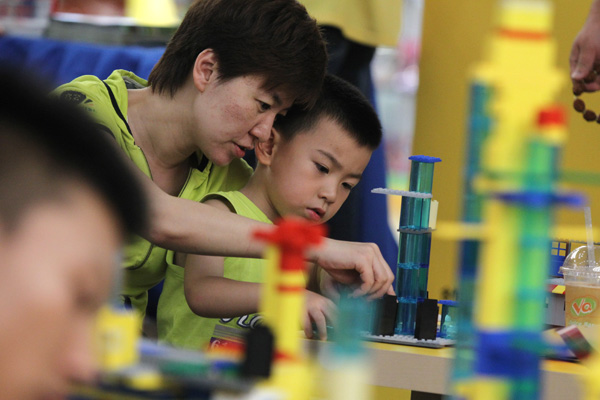 A European Union regulation on toys took full effect on Saturday, setting stricter restrictions on chemical content of toys, putting pressure on Chinese toy makers. Zhu Xingxin / China Daily
The directive, 2009/48/EC, which took partial effect two years ago, sets stricter requirements on the quality of toys and manufacturers’ obligations by adding more articles on the chemical content of products.
“The implementation of the new directive will pose a huge challenge for Chinese toy manufacturers to export to Europe, as it sets a much stricter threshold for entry to the market,”said Xiong Xiaokun, a researcher on light industry at China Investment Consulting Co’s industry research center.
China is the world’s biggest toy producer and exporter, taking a two-third share of the international market. China exported toys worth $11.45 billion in 2012, including $2.6 billion to the EU, making the EU China’s second-largest market for toys, according to the General Administration of Customs.
The new directive includes a number of new articles on toys’ mechanical and electrical performance and chemical and hygiene requirements.
In particular, it sets stricter standards on the content of some chemical elements and bans many other chemicals, such as N-nitrosamine.
For example, 25 micrograms of arsenic, a poisonous substance that exists widely in nature but can cause cancer and damage the nervous system, were allowed in every gram of toy materials in the previous regulation. The new directive restricts the arsenic content to 0.9 micrograms per gram of toy materials.
“The new directive greatly increases the technical threshold for toy exports to the EU and will definitely drive up the cost of manufacturing toys,”said Michael Liu, a toy quality expert with Intertek, one of the world’s largest quality and safety solutions providers.
“For manufacturers, the real challenge facing them is to ensure the purchasing of environmentally friendly materials,”he said.
Up to 80 percent of products from about 20 toy companies in Hangzhou, Zhejiang province, were unable to meet the new technical requirements, according to a survey by local industrial and commercial authorities.
To help enterprises better cope with the new directive, the General Administration of Quality Supervision, Inspection and Quarantine has offered 68 training sessions to more than 2,400 toy makers across China, the administration said.
The administration also organized institutes to intensify research on chemical testing and formulate methods to quickly test for major heavy metals in toys.
Using more environmentally friendly materials means the cost for toy manufacturers will increase by a large margin, according to Jiang Xiaoliang, who works for Jiangmen’s quality inspection and quarantine bureau.
To cope with the possible surge in cost, “toy manufacturers should also find alternate materials or upgrade their designs for toys”, he said.
Added pressure
Liu Yanfang, secretary-general of Shenzhen Toys Industry Association, said the new regulation will put more pressure on China’s exports, which have performed weakly in the first half of the year.
According to the customs authority, China’s toy exports registered a slight increase of only 5.8 percent in 2012, 1.6 percentage points lower than a year earlier, due to the increased overseas quality requirements and rising production costs.
The regulation will bring more challenges for large producers, which are building their brands in overseas markets.
“Toy manufacturers should adapt to the changing overseas market, which has introduced a series of technical standards for Chinese toy products. In the long term, companies who attach more importance to self-innovation and building brands will find customers in Europe,”he said.
Michael Liu of Intertek, who is also a member of China’s National Technical Committee of Standardization for Toys, said the new directive could provide an opportunity for domestic enterprises to upgrade industrially.
“If large Chinese toy enterprises seize the opportunity, the new standard will increase the competitiveness of Chinese toy enterprises and help them increase market share and rely less on low prices for competition in the international market.”
Industry insiders called on Chinese toy manufacturers to pay more attention to emerging markets to sustain business growth, given that demand in the traditional markets of the United States and Europe are weakening and more technical requirements are expected in the future.
Lin Wei, general manager of Big Tree Toys in Shantou, Guangdong province, said the toy maker has attached increasing significance to the domestic and emerging overseas markets.
“Demand in the major markets in the US and Europe has dropped significantly in the past few years. But new demand from the domestic and South American markets has increased,”Lin said.
With stricter quality requirements in the European market, Lin said the company will increase its efforts to improve product quality and testing.
“We will not give up the major market. But we will also develop sales channels in emerging markets,”Lin said.
Liu Yangfang of Shenzhen Toys Industry Association said local companies have been preparing for the new technical requirements for the past few years.